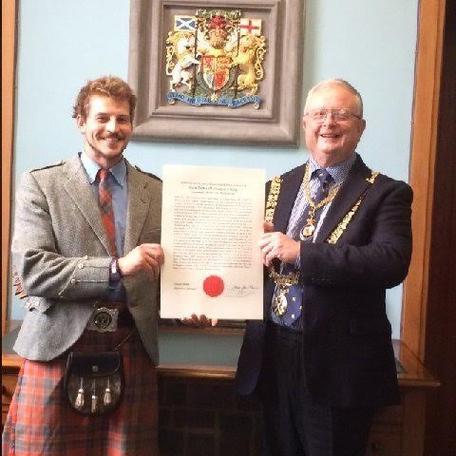 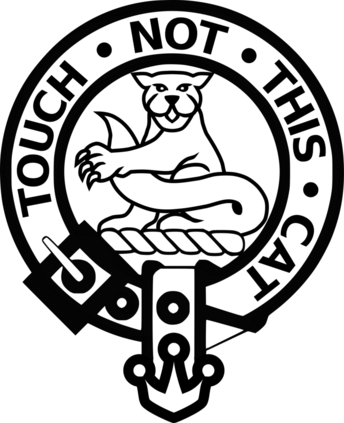 Welcome to the Clan MacGillivray Site

We are happy to report that on Thursday, 25th August, the Lord Lyon presented tolain Donald MacGillivray his Commission as Commander of the Clan MacGillivray.

"The day was superb and Iain's parents, 3 brothers and 2 sisters were in attendance.  The Lyon had invited Yvonne Holton our Reporting Officer as well as the secretary of Clan Chattan. A wonderful day for the Clan.

Iain has really stepped up and is off to Australia for their 40th anniversary late October. I understand he is visiting Holland in November and will visit Canada and America next year!"

The authenticity and antiquity of this tartan are well established as it is one of a great family of tartans based on the simple Mackintosh sett, or pattern, found here in the central check of wider blue and green lines with the thin blue line in the centre. The added distinguishing elements are the thin blue and azure (light blue) lines. It is said that the azure is indicative of a clan originating from the west coast or Isles.

The sett or pattern, is the same as that for the MacGillivray Modern, but the "Ancient" version is an attempt to render the colours in the softer, lighter hues that would have resulted from the earlier use of natural vegetable and mineral dyes, before the introduction of the more intense modern chemical dyes.

Hunting tartans generally avoid the brighter colours in favour of those that would provide camouflage when hunting. The use of a brown background here is very unusual and distinctive. This tartan, quite different in its sett from the main MacGillivray tartan, has been used for some years by the Calrossie family in eastern Ross-shire, and is sometimes reffered to as the "Calrossie Sett". The same pattern, with a soft "ancient" red background is associated with another family and called the "Aberchalder Sett". It is also seen in a "weathered" version, where the background turns to a lighter "sand" hue.

Note that Mac, Mc Mhic and M' have often been used interchangeably - all from the Gaelic Mhic, meaning 'son of.' The G can be capitalized or used as lower case.

Origin of the Name MacGillivray:

From the Gaelic: Mac Gille breith -or- Mac Gille bhrath "Son of the Servant of Judgement"

The above Gaelic source for the name MacGillivray is only one of a number that have been suggested, though it is the one most widely accepted. In the context of the Gaelic social structure of the west coast and Isles of Scotland from whence the Clan is thought to have originated, it most likely refers to an occupational role, and perhaps a hereditary one, of 'deemster' (or doomsayer), the officer of the lord's court of law who pronounces its final judgement.

This would be consistent with the way that civil administration and professions were arranged under the MacDonald Lords of the Isles (c.1158-1493) over the whole western and insular section of Scotland where their writ held sway. This dominion of 'Gaeldom' was distinct in many of its forms and often autonomous in its power from the Anglo-Norman Kings of Scots who ruled elsewhere in Scotland.

The MacGillivrays are an old clan within the highland society, affirmed by Clan Donald's own traditions, and that they had some prominence in it is attested by the Seannachaidh Hugh MacDonald of Sleat, who counts 'MacGillevray in Mull' among the freeholders entitled to sit on the Council of the Isles, assembled at Loch Finlaggan in Islay and elsewhere.

More details are listed under the history tab.