The MacGillivrays feature in early Western Isles folklore associated with the Macleans of Mull, and the name translates from the Gaelic as “Son of the Servant of Judgement. The Clan MacGillivray was an important clan even before the Norsemen were driven out of the Outer Hebrides by King Somerled who was Lord of the Isles in the 12th century.

Clan Mhic Gillebrath, occupying Morvern and Lochaber, were one of the clans dispersed by Alexander II when he took control of Argyll in 1222. Some of the clan remained on the Isle of Mull while others stayed in Morvern. There is a tradition that asserts that the chief of the clan placed himself under the protection of the chiefs of Clan Mackintosh, who were also chiefs of the Chattan Confederation. Thereafter the Clan MacGillivray was part of Clan Chattan.

The Clan MacGillivray eventually joined the Chattan Confederation which was headed by the chief of the Clan MacKintosh. The clan have always distinguished themselves by their prowess and bravery. One of them, Ivor MacGillivray was killed at Drumlui in a battle with the Clan Cameron in about the year 1330. Ivor was the son of chief Duncan MacGillivray. This Duncan married a natural daughter of the sixth Clan MacKintosh chief.

A hundred years later, in about the middle of the fifteenth century, the chief of the MacGillivrays appears to have been a certain Ian Ciar (Brown). At any rate, when William, fifteenth chief of the Mackintoshes, was infefted in the estate of Moy and other lands held from the Bishop of Moray, the names of a son and two grandsons of this Ian Ciar appear in the list of witnesses. Other Mackintosh documents show the race to have been settled by that time on the lands of Dunmaglass (the fort of the grey man’s son), belonging to the thanes of Cawdor.

Ian Ciar MacGillivray was apparently succeeded by a son, Duncan, and he again by his son Ferquhar, who, in 1549, gave letters of reversion of the lands of Dalmigavie to Robert Dunbar of Durris. Ferquhar’s son, again, Alastair, in 1581 paid forty shillings to Thomas Calder, Sheriff-Depute of Nairn and chief of Clan Calder for ” two taxations of his £4 lands of Domnaglasche, granted by the nobility to the King.”

It was in his time, in 1594, that the MacGillivrays fought in the royal army under the young Earl of Argyll at the disastrous Battle of Glenlivet.

In 1609 there was a great gathering of the Chattan Confederation at which loyalties were given to the Mackintosh chief and the haill kin and race of Macgillivray was represented by Malcolm MacGillivray of Dalcrombie and Duncan MacGillivray of Dunmaglass.

Alastair’s son, Ferquhar, appears to have been a minor in 1607 and 1609, for in the former of these years his kinsman Malcolm MacBean was among the leading men of Clan Chattan called to answer to the Privy Council for the good behaviour of Clan Chattan during the minority of Sir Lachlan Mackintosh its chief; and in the latter year, when a great band of union was made at Termit, near Inverness, between the various septs of Clan Chattan, responsibility for the ”haill kin and race of the Clan M’Illivray” was accepted by Malcolm MacBean, Ewen M Ewen, and Duncan MacFerquhar, the last-named being designated as tenant in Dunmaglass, and being probably an uncle of young Ferquhar MacGillivray.

The Macgilivrays were one of the oldest and most important of the clans of the Chattan Confederation, and from 1626, when their head, Ferquhard MacAllister, acquired a right to the lands of Dunmaglass, frequent mention of them is found in extant documents and registers.

Along with most of the other clans of the Chattan Confederation, the MacGillivrays were staunch Jacobites, supporting the return of the Stuarts as King of Scotland, Ireland and England, in both the Jacobite rising of 1715 and the Jacobite rising of 1745. During the 1745 rising the chief of Mackintoshes and Clan Chattan was a serving officer in the Black Watch regiment of the British Army but his wife, Lady Anne Farquharson-MacKintosh rallied the Chattan Confederation in support of the Jacobites and placed chief Alexander MacGillivray in command of the Clan Chattan regiment. Alexander MacGillivray was killed leading his clan at the Battle of Culloden in 1746, along with many of his followers. A graveyard at Dunlichity commemorates the many MacGillivrays who fell in the battle. After Culloden many MacGillivrays emigrated across the Atlantic where many of them were successful, particularly as traders.

The last chief to live at Dunmaglass was the 13th laird, Capt. John William MacGillivray, who had to sell his estate and died without an heir in 1914. The chiefship then passed to a cousin of his, John Farquhar MacGillivray, who lived in Toronto, Ontario, Canada John Farquhar MacGillivray was chief for 32 years when he died in 1942 without an heir, and the last chief of Clan MacGillivray. Another Canadian, Col. George B. Macgillivray, later petitioned Lord Lyon King of Arms three times between 1953 to 1989 to be recognised as chief. Lord Lyon, not satisfied with the proofs Macgillivray submitted, denied him status of chief, but commissioned him as Commander of the Clan. Macgillivray served as Commander for five years before dying in 1994, and to this day the clan remains without a leader. 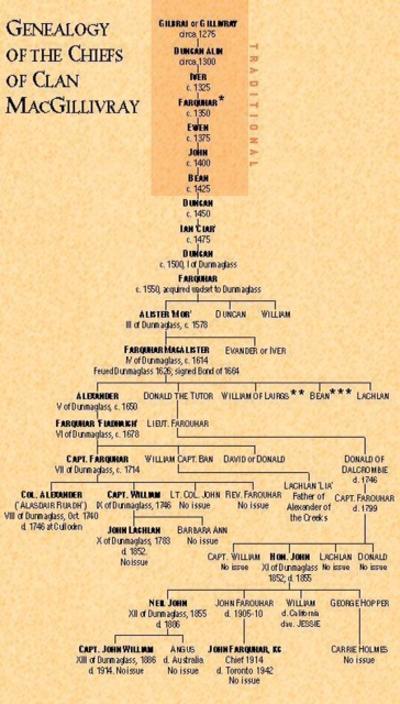