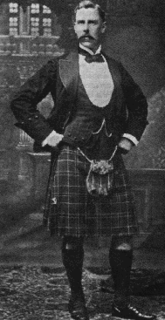 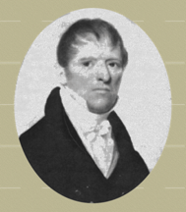 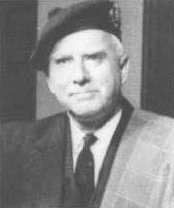 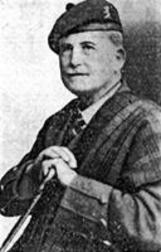 The interruption of our Chiefship is actually a fairly recent occurrence. Clan tradition and the historical record present us with an apparently unbroken line of MacGillivray chiefs stretching over nearly 700 years, from the late 13th century up to the middle of the 20th, when the present vacancy began.

The earliest "chiefly" figure on record, and the apparent progenitor of the Clan, is one "Gilbrai," or Gillivray, whom Mackintosh chronicles relate "betook himself and his posterity under the wings and tutelage of Ferquhard" (5th Chief of the Mackintoshes) sometime in the late 13th century, thus beginning the fruitful and longstanding alliance between these two clans. MacGillivray chiefs emerge into what could be called verifiable history (i.e., supported by independent records) during the 1500s, when they began to acquire rights to the Dunmaglass estate in Stratherrick, which became the duthus, or seat, of the chiefs and remained so for thirteen generations.

It is not quite correct, though, to imply that there have never been interruptions, even momentary ones, in the chiefly succession. Earlier ones may have occurred that do not show up in surviving records. But there is one in particular about which we certainly do know. It occurred in the 1850s. John Lachlan MacGillivray, 10th Laird of Dunmaglass, was Chief at the time. He was the picture of the prosperous Highland laird, well endowed with extensive country properties and wealth. But he had no children and died in 1852 leaving no destination in his will for either his property or the Chiefship.

This gave rise in the years just after to fiercely contested litigations by several claimants. At stake were most of John Lachlan's extensive properties and, in the case of Dunmaglass, by custom, the Chiefship as well. The principal claimants, that is, those claiming the properties that included Dunmaglass, were the Hon. John MacGillivray of Canada, a descendant of Donald of Dalcrombie (d. 1746) who was a cousin of the Chiefs of his time, and the Rev. Lachlan MacGillivray of Australia, representing the MacGillivrays of Daviot. In 1857 the court ruled in favor of Hon. John's line as senior to Rev. Lachlan's. John had died two years earlier, so the estates and the Chiefship came to his son, Neil John, and the Dalcrombie line was established as the new chiefly one.

The Dalcrombie line gave us just two more chiefs before it too expired. Neil John's son, John William inherited the Chiefship and what was left of the estates -- Dunmaglass and adjacent Easter Aberchalder -- in 1886. But mounting debt forced him to sell all of it in 1890. John William himself died destitute and childless in London in 1914, far from the land of his ancestors and their long and proud heritage. He was the last of a long line of MacGillivray chiefs holding their duthus at Dunmaglass, the prized heartland of the MacGillivray chiefs of Strathnairn.

Now divorced from attachment to the old Clan lands, the Chiefship itself passed nominally to a cousin of John William, John Farquhar MacGillivray, a tax official in Toronto, Canada. He was conscious of his status and legacy as Chief, but lived out his life in relative obscurity before he too died without direct heirs in 1942. Now the chiefly lineage itself had apparently come to an end. From that time to the present, no MacGillivray has succeeded in establishing a right to the Chiefship of the Clan.

That is not to say, however, that none have tried to establish such rights, or at least to publicly claim them. By the mid-20th century, the world had been greatly transformed from that known by the chiefs of old. Culloden, the Clearances, repeal of hereditary jurisdictions, and government land reform schemes had left the ancient clan system and its deep ties to the land of the Highlands a mere memory, while everywhere clansfolk themselves had been dispersed to the four corners of the earth leaving the Highlands for the most part bereft of its indiginous population. But memory alone can still be a very powerful force, particularly when it is such a deep and abiding thing as it has always been to Highland folk. While no longer connected to the lands of its ancestors, the Clan now became, in effect, a great worldwide family. And for some, the memory of a long and proud Clan heritage only fairly recently torn from its hereditary moorings remained an active and compelling interest.

In Scotland as well a remnant of the old system governing tribal-feudal matters remained in the office of Lord Lyon King of Arms, an adjunct of the monarchy with its own court expressing legal jurisdiction over matters of rights to bear hereditary arms, titles and honours, including clan chiefship. In the 1950s and 60s Lord Lyon was asserting more active authority in these areas, resulting in the settlement at that time of several outstanding claims to clan chiefships.

During the 1930s, apparently even before the death of John Farquhar of Toronto, a Scottish clansman made widely publicized claims on the Chiefship. This was Dr. Angus MacGillivray, an ophthalmic surgeon in Dundee. His claim was based on his family's connection to the Lagg and Balnain townships on the Dunmaglass estate. His grandfather William was alive during the estate litigations of the 1850s, but, owing to the loss of family papers and prohibitive costs of entering the legal fray, was unable to assert his case at the time. Dr. Angus was the first MacGillivray of the 20th century to officially matriculate personal arms with Lord Lyon and these were based very closely on designs found on armorial gravestones that can still be seen at the burial ground of the Strathnairn MacGillivrays at Dunlichity Church. However, he was hampered by the same lack of documentation that faced his grandfather and thus was never able to satisfy Lord Lyon's stringent requirements for recognition as Chief. This did not stop him from pursuing an aggressive publicity campaign on his own behalf, and he went so far as to adopt the chiefly style of "MacGillivray of MacGillivray." Impressive as his efforts were, and interesting as his family's claimed connection may be, the Clan was still left without an authoritatively recognized hereditary leader.

Across the Atlantic in Canada, another clansman began in the 1940s and 50s to pursue a personal interest in the Clan which in time led to major accomplishments in preserving and illuminating its history and serious efforts to secure the Chiefship in his own name. His energetic exertions and achievements in a variety of Clan pursuits have probably secured him deserved status as the pre-eminent MacGillivray clansman of the latter 20th century.

After a distinguished wartime staff career and settling in as a newspaper publisher at Thunder Bay, in western Ontario, George B. Macgillivray began to pursue a deep personal interest in his own connection to the Clan. His genealogical research convinced him he was descended from Bean, a younger brother of Alexander, who was Chief c. 1650 - 1714. This was an interesting claim because the two elder siblings, between Bean and Alexander, were each ancestors of the two main contending parties in the 1850s litigations.

Like Dr. Angus, he began by matriculating personal arms with Lord Lyon, which were duly granted in. His first formal Petition for recognition as Chief was submitted to Lord Lyon in 1953, leading to years of further research to bolster his claim. Meanwhile, both his personal interest in the Clan and the support it could give to his pending claim led him to other important projects. An obstacle to settling theChiefship, which involves proving the right to bear the undifferenced arms of the Chief, was the fact that earlier MacGillivray chiefs had never registered their arms with Lord Lyon. Col. MacGillivray corrected this, using the designs found on the Dunlichity armorial gravestones as a model). He then restored and enlarged the MacGillivray burial enclosure at Dunlichity to include two past chiefs--John Lachlan and Neil John--and important cadet families. A handsome granite plaque carved with the newly granted Chiefly Arms was installed in the new enclosure.

It seems likely that Col. Macgillivray's petition was quite close to being granted by the late 60s. But before that could happen Lord Lyon retired, and the petition had to be re-submitted to a new Lord Lyon. Progress on the Colonel's claim then appeared to become stalled. Another important project Col. Macgillivray pushed around this time was publishing and co-authoring, with Robert McGillivray of Edinburgh, the first comprehensive history of the Clan, A History of the Clan MacGillivray, in 1973.

By the mid-1980s, George was encouraged to submit a third Petition for the Chiefship, this time to yet another new Lord Lyon, Sir Malcolm Innes of Edingight. It would seem that a difficulty with his claim was that its connection to past chiefs came at such an early point, making it harder to acquire the kind of contemporaneous documentation and testimonial proofs that Lyon would need to make a confident grant. While keeping open the chance that further research would make a grant of Chiefship possible in time, Lord Lyon then took measures to provide at least temporary leadership for our Clan. He translated Col.Macgillivray's Petition for Chiefship to one for Commander of the Clan and granted him a commission as such on July 27, 1989.

The Clan under a Commander

Lord Lyon was invoking in this case a feature of traditional clan organisation that was used on rare occasions in times past. A Commander, or in Gaelic, Ceann Cath, meaning "War Leader," would be appointed by the Chief to substitute for him in leading the clan in battle, in the event the Chief was unable somehow to do so himself. In this case, and several other recent ones where a chiefship has gone vacant (e.g., Clan Gunn, Clan MacArther, etc.), Lord Lyon steps in on behalf of the absent Chief to appoint the Commander. The appointment is provisional, pending ultimate settlement of the chiefship, initially for a five-year term which may then be extended, and confers no personal heriditary rights. It does however convey to the appointee all the authority of chiefship and most of its proprieties for the express purpose of rallying the leaderless clan and organising it on an interim basis.

As Commander, Col. Macgillivray acted quickly to appoint Clan Commissioners, or lieutenants, in the United Kingdom, Canada, Australia, the USA and the Netherlands, to assist him in rallying and organising the Clan on a worldwide basis. In 1992 an International Gathering of the Clan was held in Inverness, Scotland, organised and hosted by United Kingdom Clan Commissioner Mrs. Ishbel McGillivray-McGregor, which gave scores of MacGillivray clansfolk from across the world the chance to get to know the ancestral Clan country, and one another. The Gathering, together with the efforts of the Commissioners in their respective countries around the world and other initiatives of the Commander, began to give MacGillivray clansfolk worldwide renewed awareness of their ancient Clan and a glimpse of what chiefly leadership can mean to a Clan in modern times.

Most regrettably, George Macgillivray's long and active career as a champion for his Clan came to an end with his death on September 22, 1994. In the wake of this loss, his five appointed Commissioners around the world pledged to continue the work of rallying and organising the Clan. Nevertheless, after George Macgillivray's decisively important but all too brief five-year tenure as Commander, the Clan was again leaderless.

"My love to the warlike race...
The race that will not wither, and has descended
Long from every side.
Excellent M'Gillivrays of the Doun,
Whom I shall ever hold in esteem."