On 16 April 1746, the Jacobite forces of Charles Edward Stuart fought loyalist troops commanded by William Augustus, Duke of Cumberland near Inverness in the Scottish Highlands. The victory of the forces loyal to the House of Hanover (monarchs of the United Kingdome from 1714 to 1901)  at Culloden decisively halted the Jacobites [followers of James II] intent to overthrow the House of Hanover and restore theHouse of Stuart to the British throne.

Charles Stuart's Jacobite army consisted largely of Scottish Highlanders, as well as a number of Lowland Scots and a small detachment of Englishmen from the Manchester Regiment. The Jacobites were supported and supplied by the Kingdom of France from Irish and Scots units in the French service. A composite battalion of infantry ("Irish Picquets") comprising detachments from each of the regiments of the Irish Brigade plus one squadron of Irish cavalry in the French army served at the battle alongside the regiment of Royal Scots (Royal Ecossais) raised the previous year to support the Stuart claim. The British Government (Hanoverian loyalist) forces were mostly English, along with a significant number of Scottish Lowlanders and Highlanders, a battalion of Ulstermen and some Hessians from Germany and Austrians. The battle on Culloden Moor was both quick and bloody, taking place within an hour. Following an unsuccessful Highland charge against the government lines, the Jacobites were routed and driven from the field.

Between 1,500 and 2,000 Jacobites were killed or wounded in the brief battle, while government losses were lighter with 50 dead and 259 wounded. Efforts were subsequently taken to further integrate the comparatively wild Highlands into the Kingdom of Great Britain; civil penalties were introduced to weaken Gaelic culture and attack the Scottish clan system.

Clan MacGillivray may have contributed upwards of 150 men to the battle, and 6 of the officers.

Colonel Alexander MacGillivray, Alistair of Dunmaglass
​
Clan Chattan Regiment was in the first line, in the center position, consisting of 350 men, led by Alexander MacGillivray of Dunmaglass, Chief of Clan MacGillivray, for Lady Anne Farquharson MacIntosh, "Colonel Anne," wife of the Chief of Clan MacIntosh and Captain of the Clan Chattan Confederation. The red haired MacGillivray of Dunmaglass was the first to pass through the infantry, leaping over the bodies of the men, when he was struck down. He was able to crawl to a spring of water in the rear where he died. His body, after lying for some weeks in a pit where it had been thrown with others Highland dead by the English soldiers, was taken up by his friends and buried across the threshold of the church of Petty. His marker on the battlefield is by the Well of the Dead. ​

Clan Chattan was the first to charge the English cannons and infantry, charging up the hill into the cannon grapeshot and blazing musket fire. Most of the Clan Chattan men died before even reaching the English infantry, but Big John of the Muskets was one who broke through the English line, killing twelve soldiers and was running on a solitary battalion in the rear when he took a pistol shot and was killed.

One of the three officers of the Chattan battalion who escaped from Culloden was a kinsman of these two brothers – Farquhar of Dalcrombie. He was only 16 at the time of Culloden.  It is said that he lead the tattered remnants of Clan Chattan off of the battlefield.

Alexander MacGillivray of Petty was a taxman, younger brother of Dalcrombie and died on the battlefield.

Lieutenant Robert MacGillivray in the Dalziel of Petty

Robert MacGillivray of Petty was a farmer, an officer and died on the battlefield.

Archibald MacGillivray of Petty was Robert's brother, volunteered having just returned from South Carolina. He survived and went on to lead the Daviot family.​

William of Dunmaglass, brother of Alexander and Major John Mor MacGillivray, was also a warrior, and gained the rank of captain in the old 89th regiment, raised about 1758.

Donald MacGillivray,of Aberchalder, served with the Frasers of Lovat, surrendered 17 May 1746.

Some information from "A List of Persons Concerned in the Rebellion" 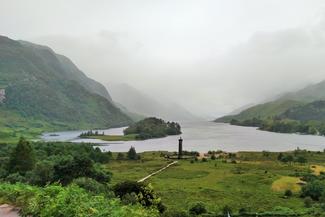 Prince Charles initially landed from France on Eriskay in the Western Isles. He then travelled to the mainland in a small rowing boat, coming ashore at Loch nan Uamh just west of Glenfinnan. On arrival on the Scottish mainland, he was met by a small number of MacDonalds. Stuart waited at Glenfinnan for a number of days as more MacDonalds, Caermones, McPhees, and McDonnells arrived.

On Monday 19 August 1745, after Prince Charles judged he had enough military support, he climbed the hill near Glenfinnan as MacMaster of Glenaladale raised his royal standard. He then announced to all the mustered clans he claimed the Scottish and the English thrones in the name of his father James Stuart.. A MacPhee was one of two pipers with Bonnie Prince Charlie when he raised his banner above Glenfinnan. Afterwards brandy was distributed to the assembled highlanders to celebrate the occasion.​